VPS or Shared – Types of Hosting 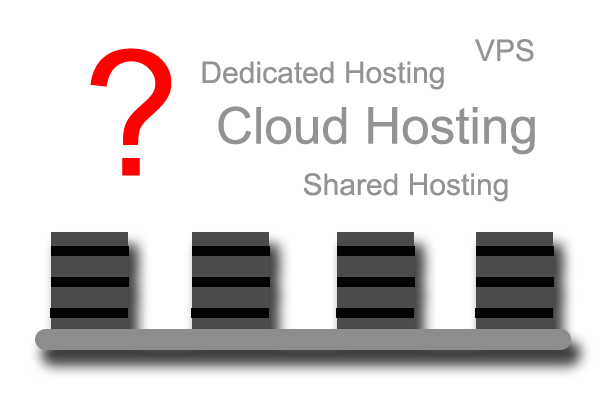 When it comes to hosting, there are various types that are often confused or misunderstood. The cost of each type is different and the scalability, redundancy and complexity of each also differs. The rule of thumb is “more features = higher price”.  True “CLOUD” hosting is not that common and the term is often loosely used to describe VPS or Virtual Private Server hosting that has some redundancy built in.

(Many Clients, One Physical OR Virtual Server)

Shared hosting is often referred to as “Web Hosting”, but the truth is that shared hosting can be used for many more uses than just websites. Web Applications, Databases and Fileservers can all run on a shared hosting platform. What this consists of is a single server (which may or may not be virtual) that hosts multiple user spaces. Whether those spaces are used for Websites, Business applications (CRM and ERP are two which come to mind) or Databases is not important.

The fact is that a single device has many users. Each user shares the device resources. This means that some form of control structure must be used to ensure that a single user process cannot use all the resources. Each user usually has access to only the application level and only the hosting provider has access to top level root or administrator access. We offer various shared hosting packages, mostly focused on web hosting. Hosting sites or apps can be reasonably easy to restore from backups in case of hardware or software issues on the host.

(Many Client Sub-Environments, One Physical OR Virtual Server)

This is one step beyond normal shared hosting. In container hosting, a single host gives each user access to a subset of libraries and commands. This subset does not affect the main operating system and can thus run custom libraries and applications that would usually clash with the standard libraries. Each user has access to their container at root / admin level, but cannot see anything outside their container. Containers can be easily migrated to a new host or restored from backups in case of hardware failure.

There is now a new category on the block:

It has become possible to put a whole operating system in a container. This makes the Containerised VPS (CVPS) faster in most cases than a fully virtualized system, but has certain downsides. Certain low level libraries and settings have to be the same as the host system and some features can only be used if the host has them. For 98% of normal virtual hosting, this is not an issue, but some usage scenarios do not work with CPVS. The upside is that the systems boot up very fast and can be cloned, moved around or spun up very quickly, making this an ideal candidate for load based hosting as features such as memory (RAM) and CPU can be changed without rebooting the CVPS. VPSs can be quickly migrated to a new host or restored from IMAGE backups in case of hardware failure.

(Many Client Servers, One Physical Server)

VPS hosting is currently the most used as it is the oldest form of virtual hosting. Virtual host are built on top of a virtualization layer which then gives each VPS access to the underlying hardware through a standardised interface. This means that many different operating systems can be run in complete isolation from each other on the same physical host. VPS’s can be quickly migrated to a new host or restored from IMAGE backups in case of hardware failure.

(One Client, One Physical Server)

Hosting a dedicated server is an expensive option as the whole cost of running the server must be carried by one client. The advantage for the client is that he has use of ALL the resources of the server. The downside is that there is less protection and higher risk in case of hardware failures. The recover time is also longer as a new physical server has to be commissioned in case of hardware failure.

(One Client, OWN Physical Server)

This is also called RentHosting as the client rents rackspace, power and connectivity from the provider. All the risk is on the client as it is their own equipment.

This is the Big Daddy of hosting and needs a lot of infrastructure to accomplish fully. Many physical servers form Infrastructure “pools”. The pools are utilised for VPS, CVPS or VPC hosting as  well as Shared hosting. The cloud environment has a lot of built in redundancy and automatic fail-over so that hardware failures do not affect the hosting environment. Whole environments can be pooled, allowing fail-over to different data centres and for some of the largest providers, even to a different country.

I hope that makes hosting a bit clearer.

The Basics of the .htaccess File

Where to find the hidden file in cPanel, how to create it & add code. Configure custom error pages, URL redirects, and more.

Continue Reading The Basics of the .htaccess File

LiteSpeed vs NGINX vs Apache

Check the details as we hold a magnifying glass to Apache, NGINX, and LiteSpeed to see which web server is best and most suitable for you.

Why You Should Consider Using a Web Hosting Provider

In this article, we take a look at why you need web hosting for your website as well as the various types of hosting available.